With this guide, you're only limited by your imagination 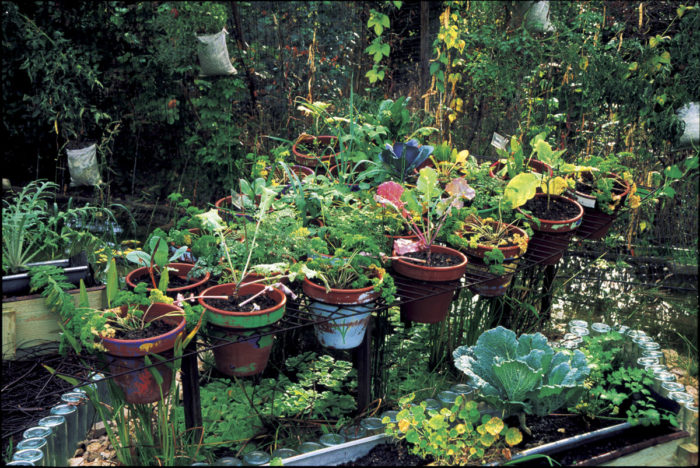 How to Prune Hydrangeas

Sometimes it’s best not to ask why. I kept reminding myself of this as I toured the eighth annual Festival des Jardins, the garden festival held at the Château de Chaumont in France’s Loire Valley. The theme of the festival varies from year to year, and last year’s theme was kitchen gardening. “Rien que des Potagers” (Nothing but Vegetable Gardens) featured 30 individual garden plots, each designed by a different gardener, selected from about 300 contestants who entered an international competition.

The festival takes place on a bluff above the Loire River, on the grounds of a château once owned by Catherine de Médicis. Today the château, overlooking the village of Chaumont-sur-Loire, is home to an acclaimed conservatory whose students and trainees assist in the construction and maintenance of the festival gardens.

I had no idea what to expect. I thought perhaps I’d uncover some kitchen garden techniques little known in North America. What I found instead was 90 percent fantasy and maybe 10 percent practicality. Garden after garden pushed the limits of what a food garden can be. There was a whimsical and brightly colored children’s garden, a Scottish garden laid out in a tartan plaid, a garden of stone slabs misted by jets of steam, a water garden inside a plastic tent supported by bamboo poles, even a Zen garden with no vegetables at all. I looked and looked for pragmatic lessons, and then I stopped looking and simply gave in to the dreamlike spirit of the place.

Together, the gardens worked their magic on me. I went away 100 percent inspired, not necessarily to replicate any of the fanciful designs but rather to take a fresh look at my own garden and my own ideas of what it means to garden, to see where I might expand the possibilities.

I was particularly taken with the many ways the notion of container gardening was interpreted, sometimes literally, with bins or beds or enclosures one could properly call containers, sometimes conceptually, with designs that provoked curiosity as much as they coaxed vegetables to grow. On the next few pages, I’d like to show you some of my favorites.

Barrels with a twist In “Gaspatio Andaluz,” a festival garden inspired by the colors of Spain, the featured containers were olive oil drums with the tops of their metal sides cut into a ribbon and twisted up to form a support for tomatoes and squash. Most of the drums sat in a shallow reflecting pool beside a long, south-facing, whitewashed wall, the better to reflect light. The north face of the wall was painted an intense blue.

One festival garden consisted of a nine-square grid of eight roughly 3-foot-square metal planting boxes, each raised conveniently on counter-height metal legs, plus a solid-sided metal box of similar size serving as a compost bin. Each planter box was in turn divided into nine squares, making it easy to separate plantings. The neat thing about the squares was the various attachments that could be screwed onto the planter sides in endless combination: mesh trellises for tomatoes, metal screens to shade tender lettuces, fixed and moveable glass to create a greenhouse effect. I thought the clear plastic plant labels with crisp, white lettering (found throughout the festival) were pretty cool, too. 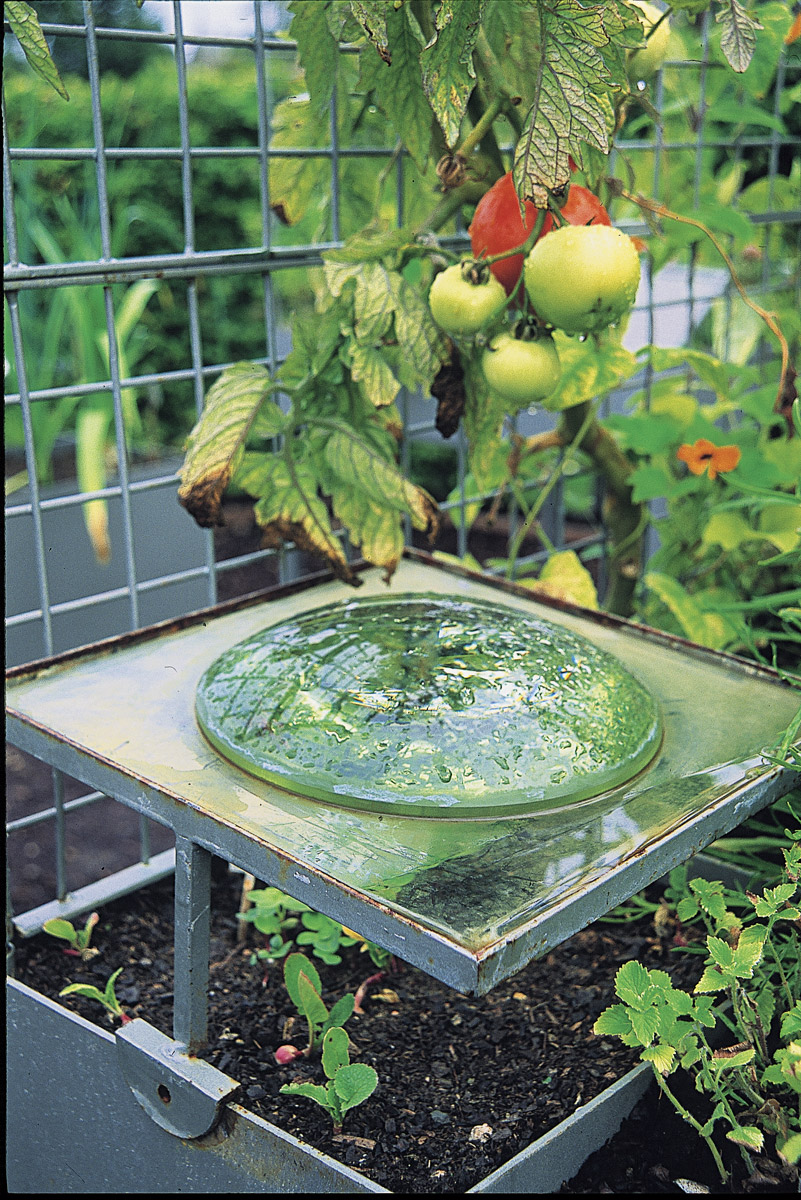 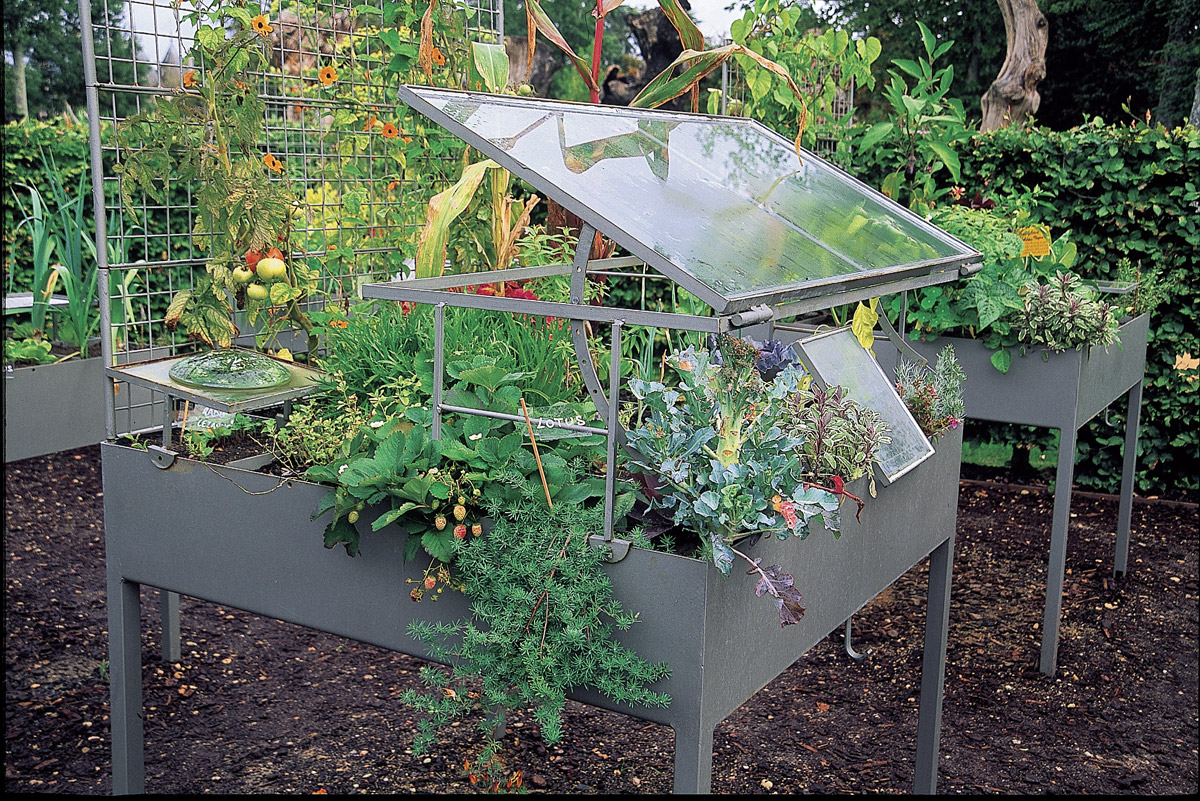 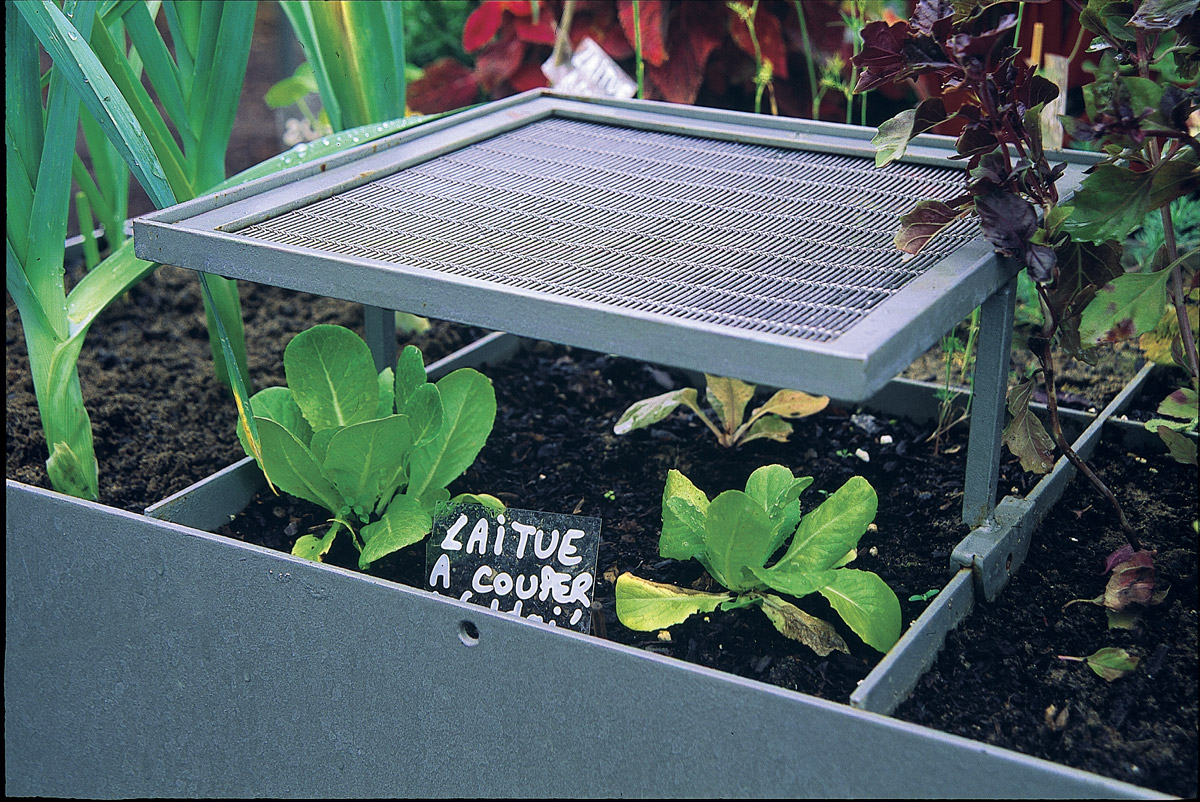 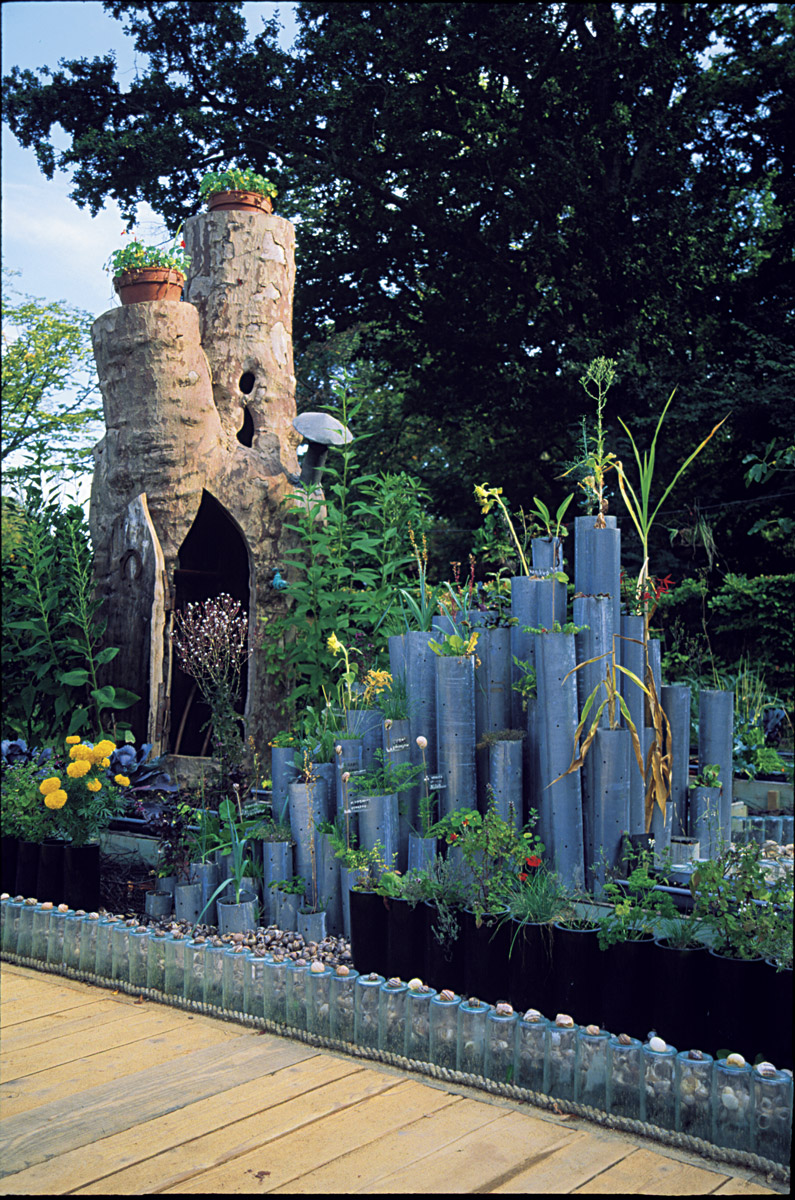 A garden curiously called “Grandfather’s Thingummy” claimed to be about pleasure, simplicity, calm, rest, and recycling. Just about everything had been turned into a container for plantings: various lengths of round metal ducts, black plastic tubes of some sort, zinc gutters, tiles, bottles, boxes.

Even the otherwise ordinary terra-cotta pots had been given a fresh look by being set in a suspended triangle of wire mesh, thus serving as shade for plants growing in the bed below. Hanging from the fence at the back were mesh bags filled with soil and serving as planting containers. The glass bottle stockade in front is supposed to deter snails. According to the sign at the garden, “a snail feast is made with snails captured on the spot which are fed on thyme.” 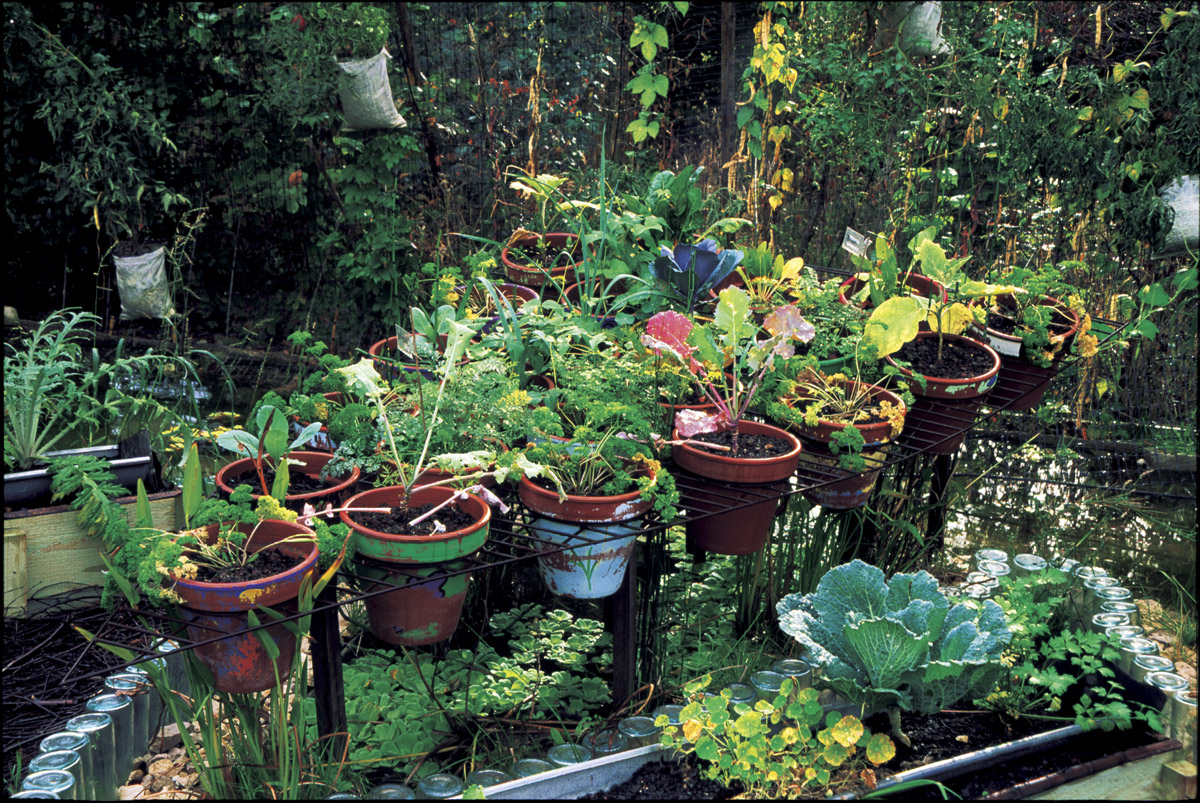 Run out of land for your kitchen garden but still have a pool or a pond? Why not float your garden on reed rafts? Your plants will grow hydroponically and never need watering. Just be sure to carry a long stick in case the crop you want to harvest has floated to the far end of the pool. According to the sign at this garden, designed by the conservatory trainees, each raft is planted with the ingredients of a well-known soup, though I was hard-pressed to identify any as the reed planters floated by. 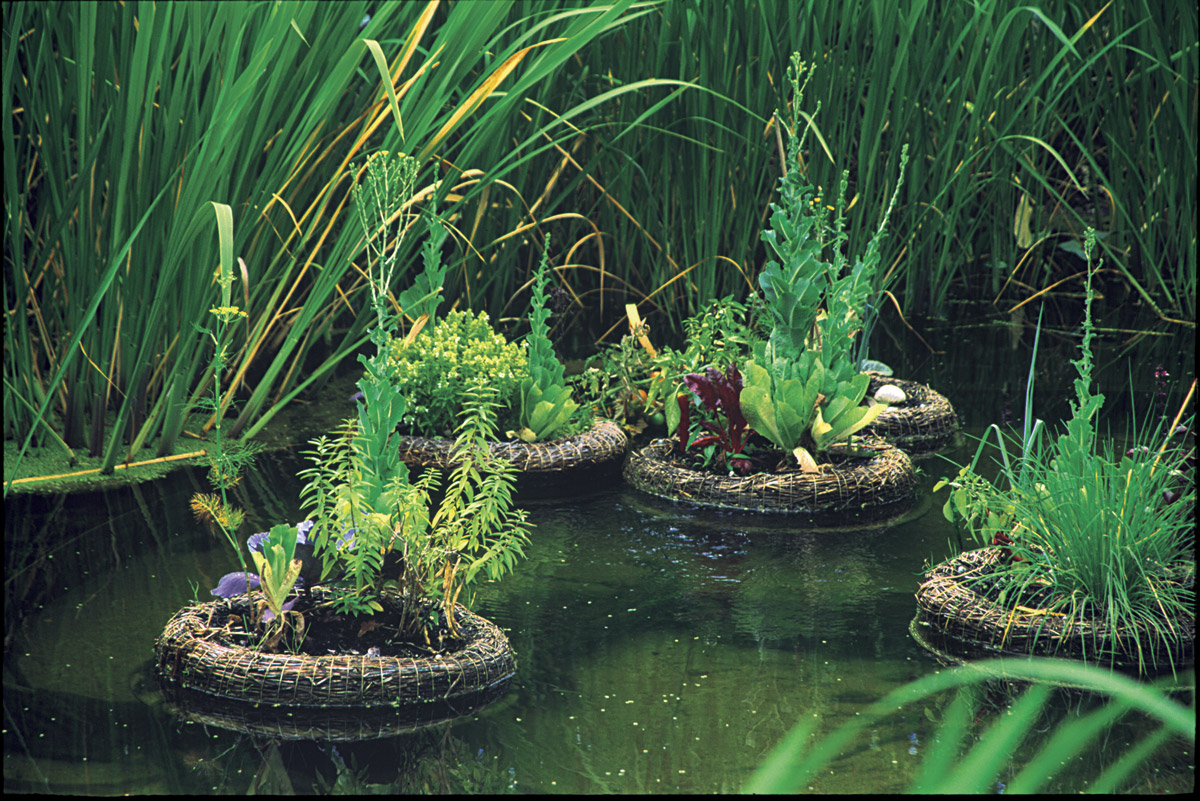 Cabbage tubs In a garden inspired by the story of the three pigs were three diminutive garden cabins made of strawlike reeds, wood, and sheet metal, which isn’t quite right, but you get the idea. The metal house featured cabbages planted in black plastic buckets, each with its own watering can. The cans, in turn, were supplied by a single hose. 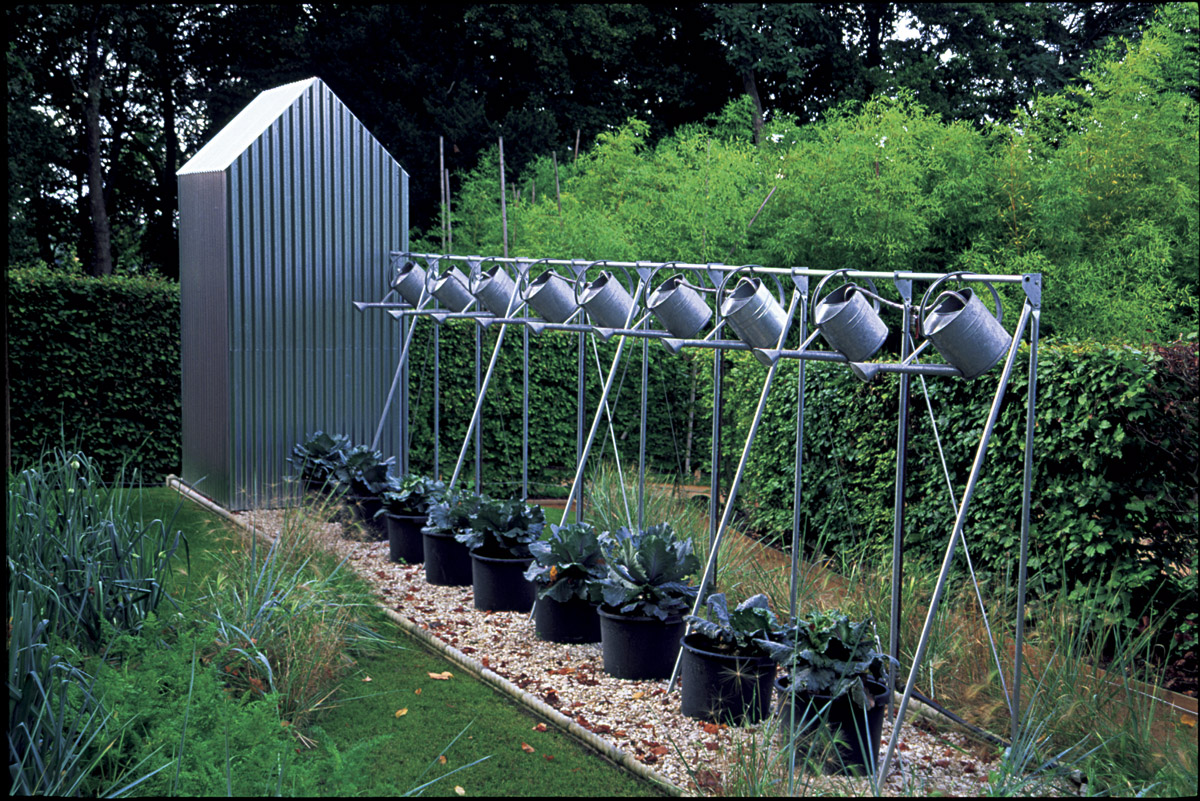 Pumpkin hammock One of the most eye-catching sights at a festival full of eye-catching sights had to be the series of pumpkins suspended by an arching net. Each pumpkin vine had been trained up a metal pole, its lone fruit deposited on the net for safekeeping. The pumpkins, poised over a Lilliputian garden world (“hills of parsley, valleys of lettuces, rivers of origanum”), are meant to symbolize the daily course of the sun. By the time I arrived in September, a few of the live pumpkins had been replaced with stand-ins, but new vines were wending their way up the poles, and the point was made. 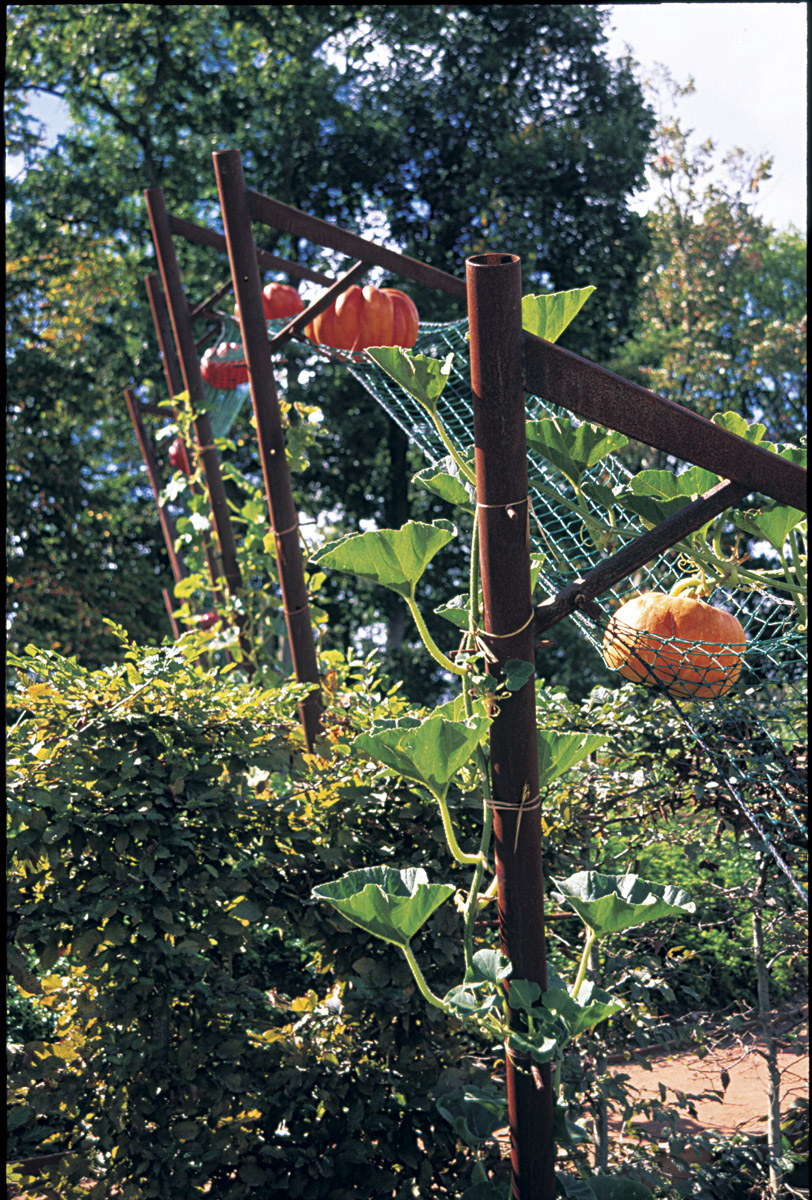 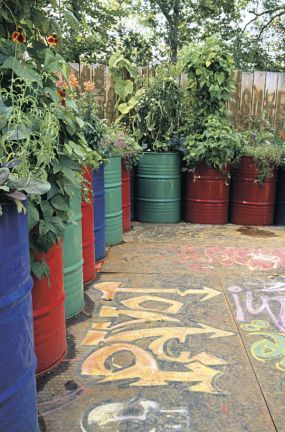 In a garden meant to show the possibilities of kitchen gardening even in the inner city, painted oil drums served as planters, set off by a rough, back-alley fence and a graffitied floor of heavy steel plates, which, if nothing else, are a great way to warm the garden and keep down weeds.

Almost traditional In a permanent conservatory garden beside the grounds of the festival proper are palletized crates serving as planters, and raised beds formed by a wattle woven from saplings and iron bands. It’s an elegant and timeless look and a fine counterpoint to a festival that never failed to push the envelope. 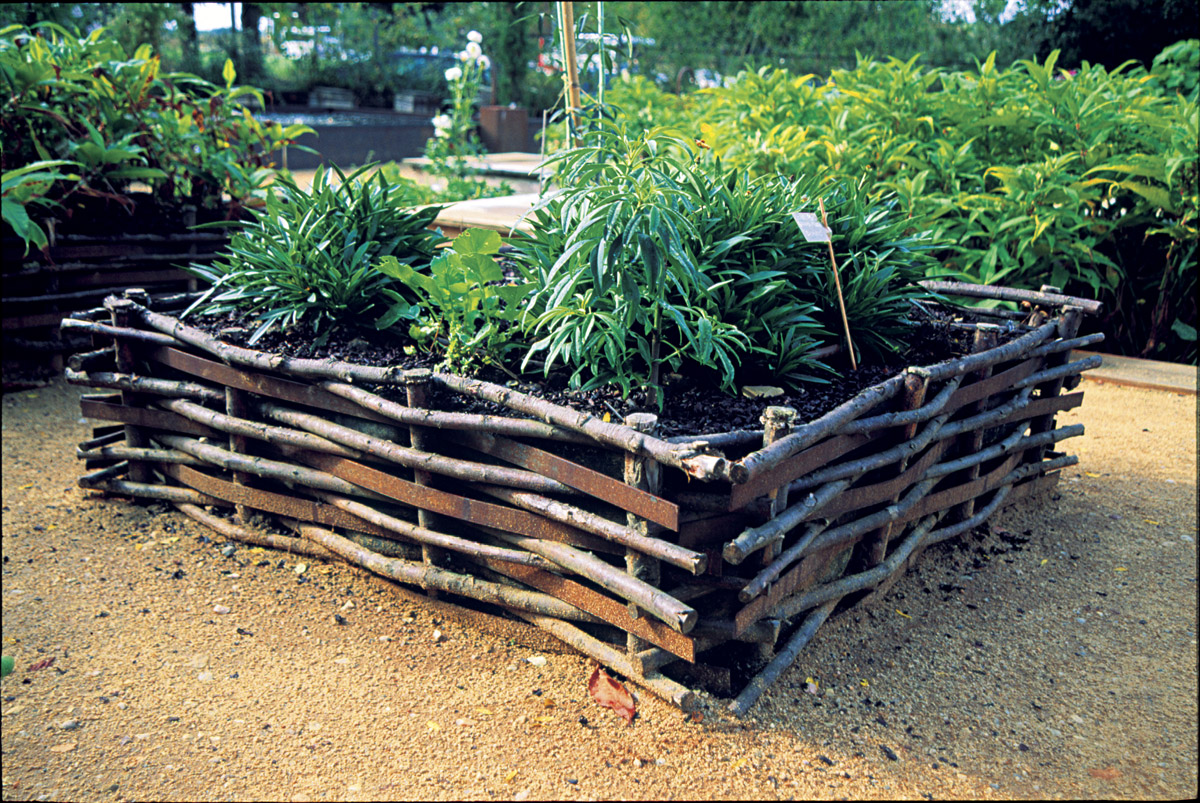