How to Prune Hydrangeas

When my wife and I first pulled up to what was then a sectioned-off patch of heavily wooded land, I said, “This is it!” She looked at me and said, “Huh? It looks like an overgrown forest.” “Exactly,” I said, and the more I looked at the lot, located on a steep hill overlooking a creek, the more I dreamed. I envisioned strolling down paths that wound around trees, rocks, and water. I wanted a lush garden that would transport us far from day-to-day demands. I quickly realized I wouldn’t be able to have a traditional lawn beneath this thick canopy, but one day, as I was clearing the last bits of brush by hand, I realized I was overlooking an appealing option right under my feet—moss. Already growing throughout the site, it was free and barefoot-friendly to boot. 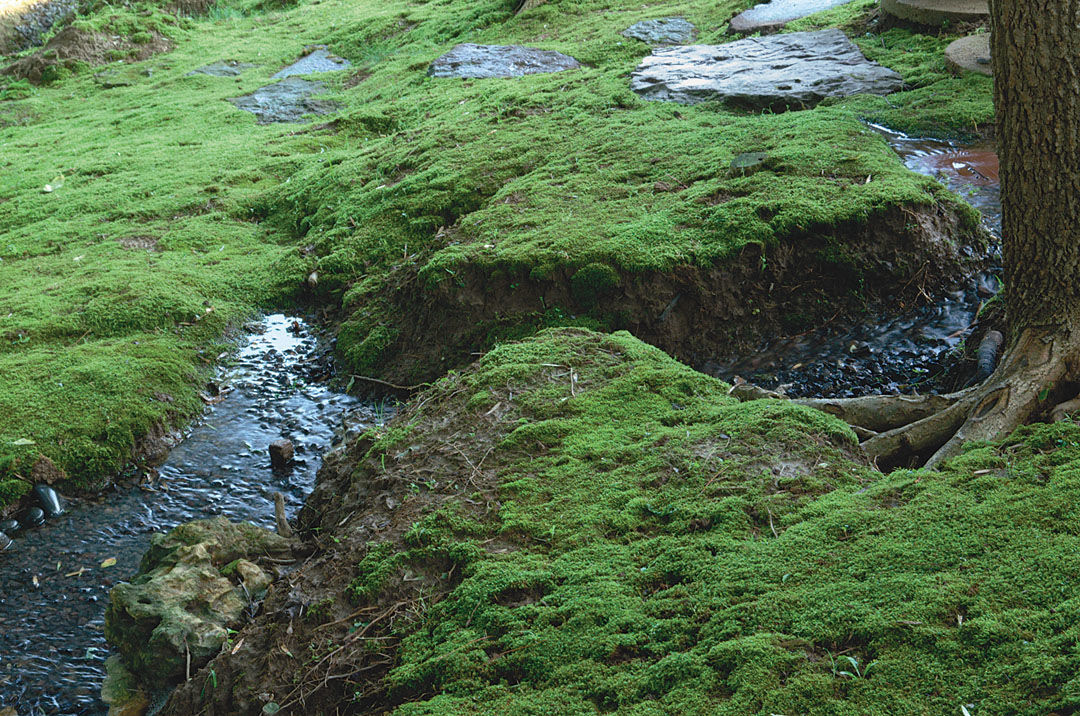 I’ve since discovered that moss offers other rewards. It stays mostly green, even during Missouri’s cold and dreary winters. And it requires minimal maintenance—a little watering during dry spells and weeding now and then by hand or with a string trimmer.

Clearing the site leads to discoveries 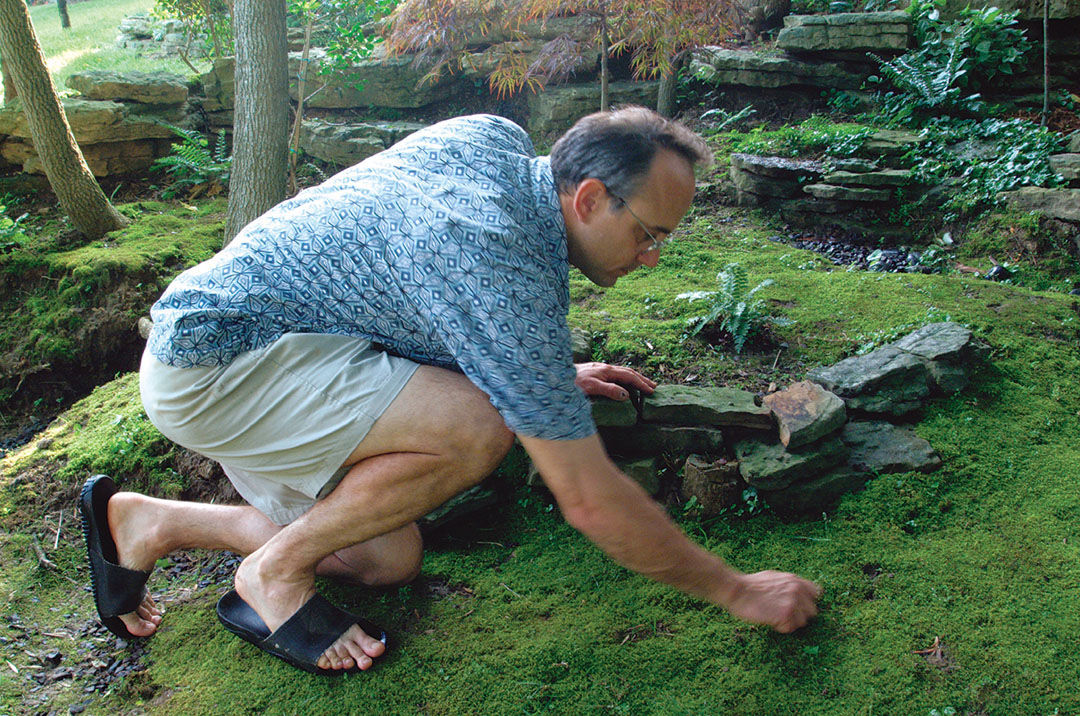 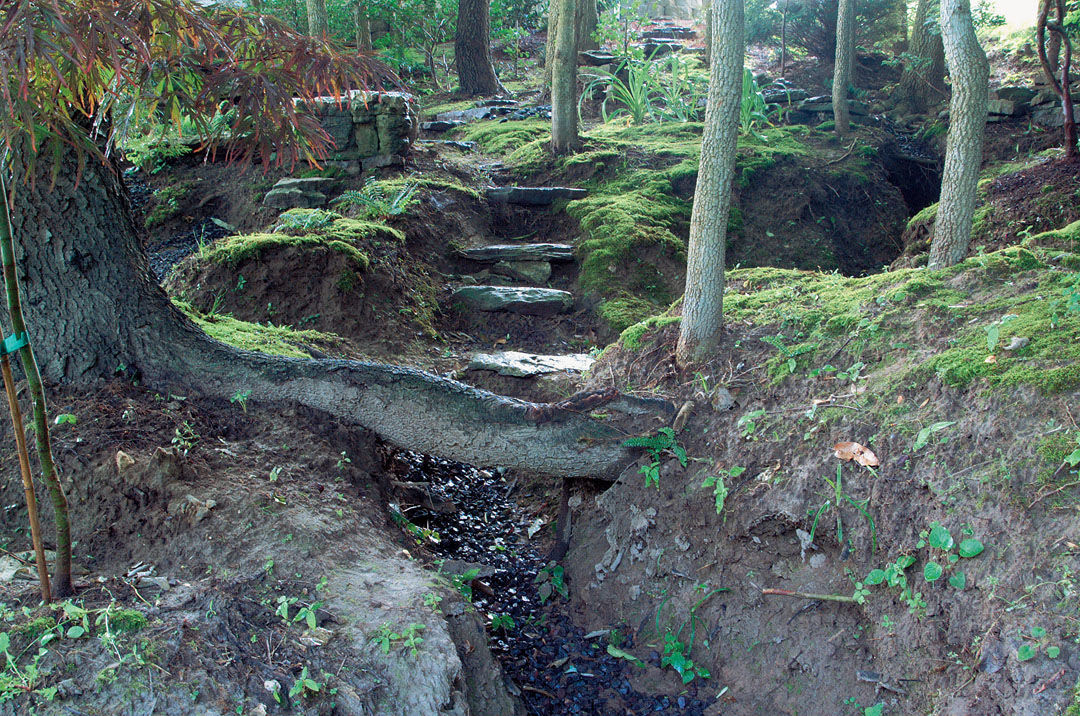 The evolution of my moss garden was gradual. I had already designed and built several Japanese rock gardens, so I had that style in mind as I began taming this dense woodland of second-growth trees and bramble. I cut trees less than 2 inches in diameter flush to the ground. Because of my garden’s steep slope (15- to 20-degree grade), I left the roots intact to help fight erosion.

As I leveled off areas among the remaining trees for pedestrian use, I came to realize that our heavy clay-based soil was good for something after all—land sculpting. Using a shovel, I dug out sections of soil, trying not to duplicate any angles or curves, so that the contours would appear as naturalistic as possible. These sculpted land formations became the perfect way to design a landscape with dramatic natural features.

I used the high-pressure stream of water from a garden hose to remove any unnatural-looking marks left by the shovel, which also created a weathered look. I used the same method to carve small details such as undercuts and rivulets. Using pruning shears, I removed any small roots exposed by the process.

To create further interest, I uncovered roots of some of the larger trees, being careful not to damage them. The exposed roots soon developed an interesting form of bark for protection against the elements.

To continue the theme of a Japanese-inspired garden, I included an element of water. I simply ran an underground system of PVC pipe from my house to the highest point of the streambeds. I just turn it on whenever I want to enjoy the sound and sight of a slow-trickling stream. 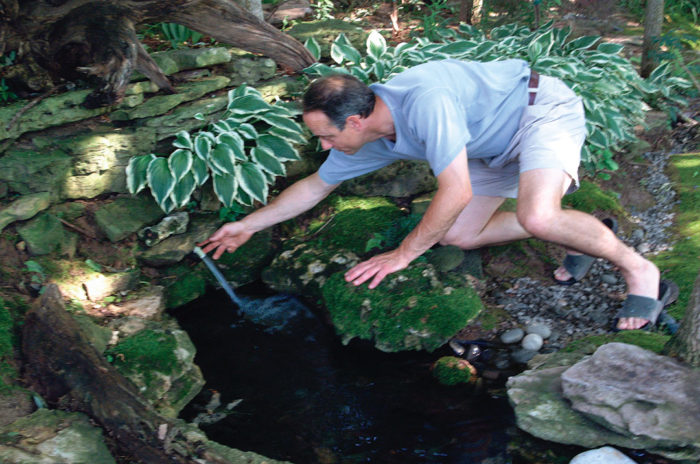 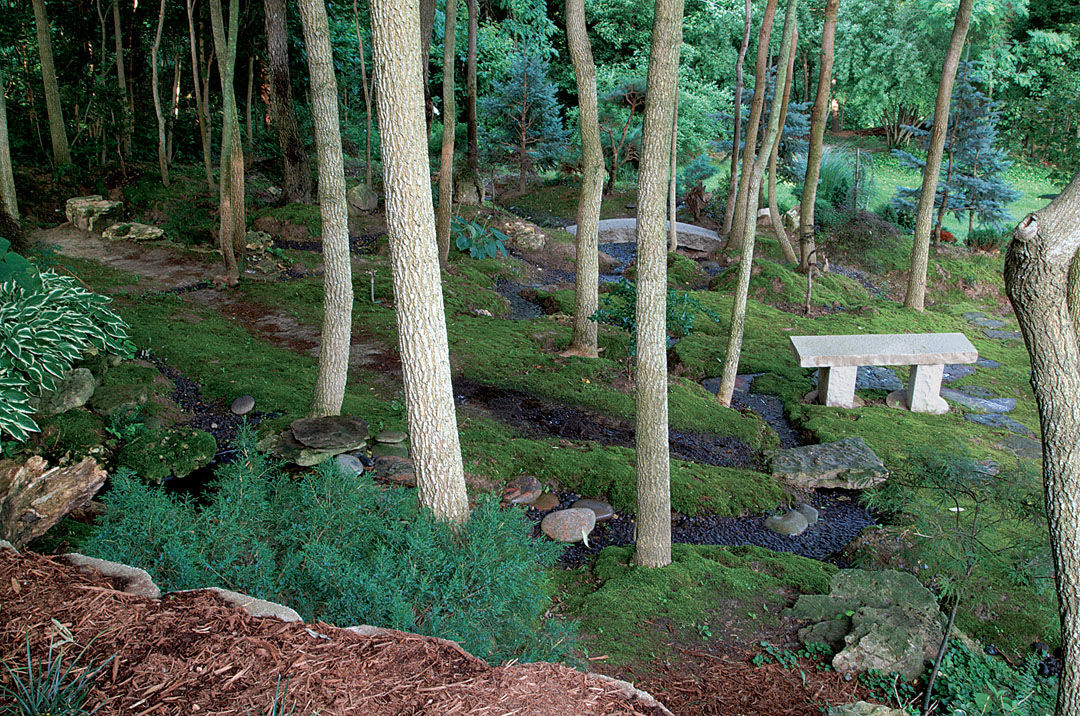 Moss ties it all together

I encouraged moss to grow on the bare soil of my newly carved hills and valleys by transplanting it there. Taking moss from places where it was abundant, I used a flat spatula to scoop up sections just below the root line. Then I tore off small pieces about the size of a nickel and patted them firmly onto their new home, placing the patches about an inch apart. Within weeks, the bare areas between patches filled in with moss. Keeping the moss moist while it was getting established was helpful.

Since I had trouble finding books that dealt with the practical care of moss, I gained most of my knowledge about moss gardening through trial and error, and I do mean error. For example, I first thought the ultimate setup would be an automatic sprinkler to mist the moss for five minutes every hour, around the clock. It didn’t take long before I was browning out large areas of moss. That’s because moss naturally tends to fold up its foliage during the day when it’s dry and sunny to protect its fragile leaves, which are only one cell thick. When moss is wet, it opens its leaves to absorb the moisture, so if the sun is out the leaves can dry out and burn. I found it’s best to water moss in the evening and only if it hasn’t rained for several days. 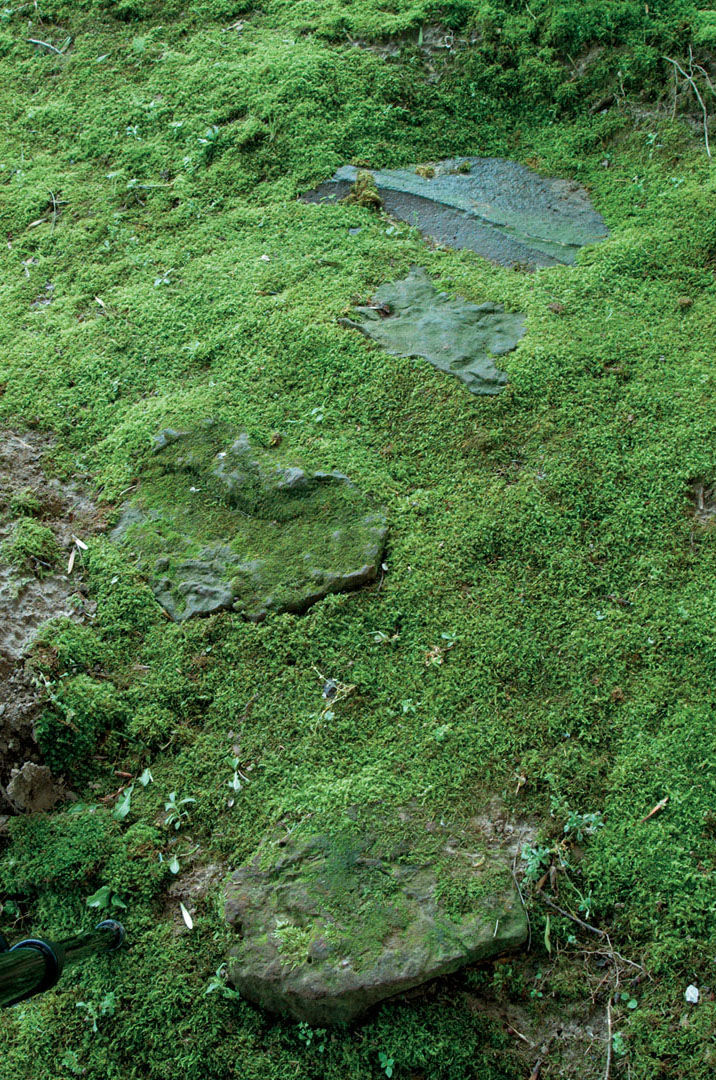 I’ve learned that the best way to promote moss growth is through grooming. Getting rid of grass, weeds, and fallen twigs and leaves makes it easier for the moss to hold its own. I don’t use any chemicals, because I don’t know what long-term effects they might have on the moss. Weather permitting, I enjoy spending a quiet 15 or 20 minutes in the morning “detailing” a small section of the garden. Weeds are most likely to offer competition in areas where the moss is new and thin. If weeds get especially heavy, as they sometimes do in spring before the leafy canopy fills in, I turn the string trimmer on and let it idle, allowing the cord to lightly skim across the moss, cutting off the weeds but leaving the moss unharmed. In the fall, I use an electric blower to remove fallen leaves. 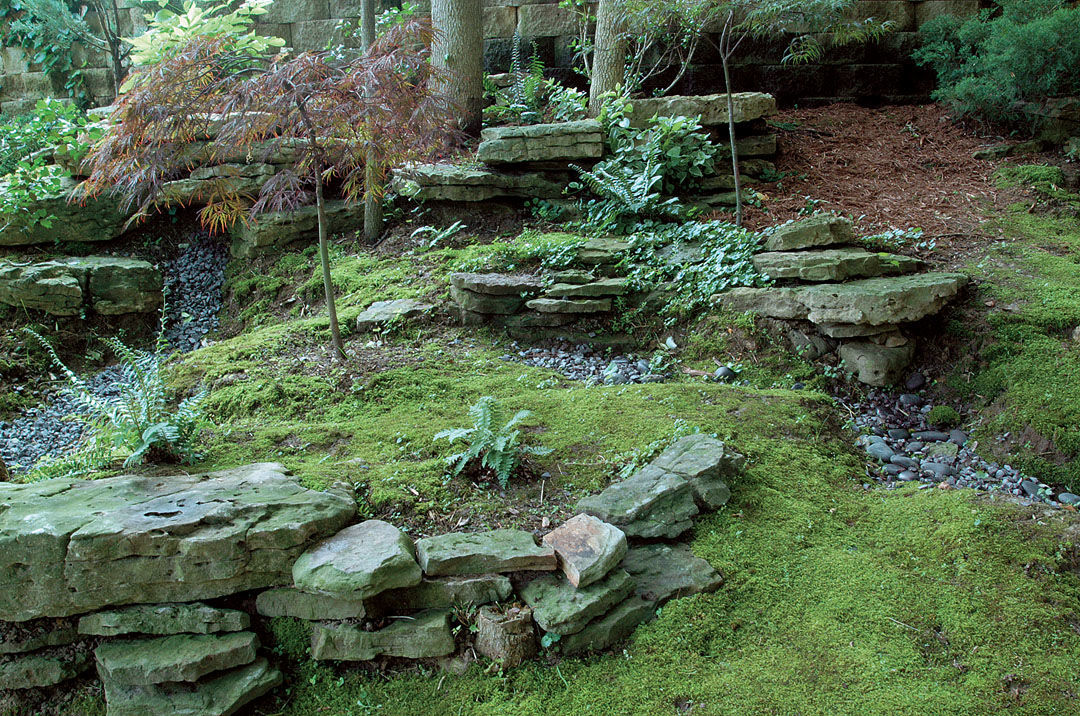 After I’d finished clearing, land sculpting, and promoting moss growth, I focused on adding more plants, mostly shade-lovers like hollies and ferns, along with deciduous Japanese maples. To add to the site’s atmosphere, I brought in more than 7,000 pounds of stone. I arranged many of the rocks to look like natural outcrops throughout the garden. I also used stone for steps (photos, below) and along edges of the gullies I had lined with crushed gravel, also known as trap rock. As for garden ornaments, I wanted to keep things simple. I included a single bench made of naturally hued limestone blocks and a 7-foot granite bridge The latter is a reclaimed section of a St. Louis street curb. One of the best things about this garden is that it offers a feeling of refuge. Even when I view it from indoors, everyday tribulations seem to slip away.

📷 While heavy shade is sometimes considered a curse, it’s a blessing when it comes to moss. The best indicator of a moss’s ability to flourish in a particular area is whether it grows there naturally. When I started this garden, I found at least five varieties of moss growing there already, each one with its preferred niche of growing conditions. For instance, broom moss (Dicranum scoparium ) seems to thrive on slopes and ledges, whereas pincushion mosses (Leucobryum spp.) like to grow around the base of trees. When considering soil types to promote moss growth, you can forget about nutrients. Moss absorbs everything through its leaves, so it turns out the best foundation for moss is simply a sturdy one. Moss likes to grow on just about anything, as long as the shade and moisture requirements are met.